Alex* (*Not her real name, case study used with permission of client) first came to see me for nutritional advice in early 2015 . She decided to see me because she has consulted numerous medical specialists about her multiple symptoms and health conditions with few positive outcomes but lots of frustration regarding her health symptoms.

She was a very nutritionally aware lady in her early 30s and had already done much research about the best diet to suit her needs. She managed to control her previously diagnosed diabetes without prescription medication- just through diet and lifestyle changes- mostly ancestral style eating with very reduced amounts of carbs and exercise, however was still experiencing the following for the last 10 years since her early 20s: 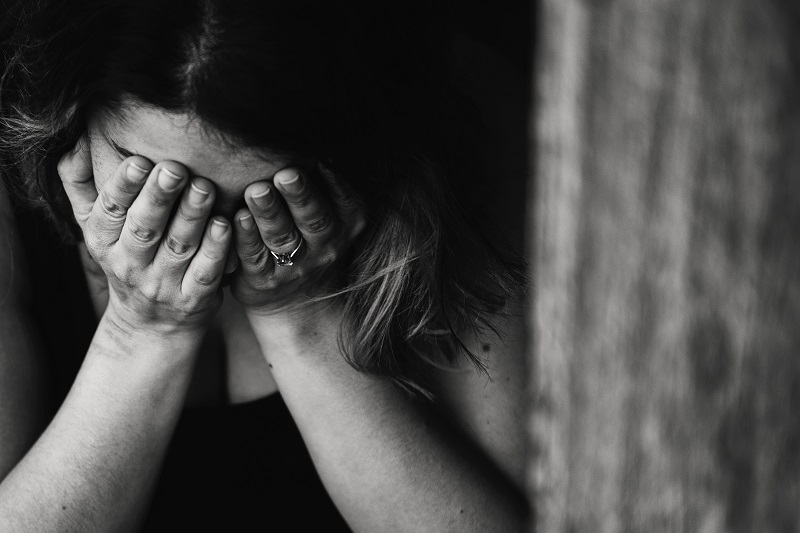 Alex had a long history of period problems and hormonal dysfunction- she got her period very early at 10 years old, had been taking the oral contraceptive pill (OCP) for 12 years (more on this later) and had an operation to address her endometriosis. She has been diagnosed with Type 2 diabetes and was on medication for this for 9 years. Her period at the time of seeing me was extremely irregular or non-existent.

Alex had grown up in Asia as a child and was unfortunately exposed to a very toxic environment as well as tropical viruses for many years. She had also experienced much family trauma as well as an eating disorder and a head/neck injury. These factors had already set her back in health early on in life. She was now hoping to start a family within 12 months. 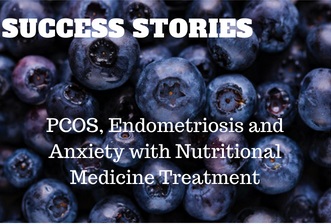 One of the first steps in addressing Alex’s health was to assess her mood which I do mostly with comprehensive mental health questionnaires. This assessment is from a biochemical perspective – which neurotransmitters are out of balance and why? What nutrients are lacking in the body to provide for a good balanced mood?

Alex’s depresssion scores were through the roof with big deficiencies in nutrients that enable us to make serotonin, dopamine, aceylcholine and noradrenaline, as well as histamine- all neurotransmitters essential for balanced mood.

It was obvious even from a mood questionnaire assessment that Alex was very deficient in nutrients like zinc and vitamin B6 and I instantly suspected she had Pyroluria, so we ordered a urine test for this metabolic condition. Alex’s Pyrrole result not surprisingly came back high indicating a long standing issue with zinc, B6, magnesium and other minerals metabolism as well as a high probability of copper overload (which proved true on later blood testing). Combined with her being on the pill for more than a decade, this created a perfect (bad!) hormonal storm with her body being overloaded with estrogen and deficient in progesterone- the essential ingredient for a relaxed, balanced and fertile woman.

I prescribed Alex to take appropriate mineral/vitamin supplements to begin to rectify these issues. It is very common for this imbalance to be a contributing factor in hormonal conditions.

When Alex started seeing me she was following a fairly good ancestral diet with lots of good fats, protein and a reasonable amount of veggies. However, she was ‘picking herself up’ daily with 1 or 2 coffees or green teas and ‘winding herself down’ in the evening with 400mL of red wine. Her diet was fairly heavy on coconut oil and coconut yogurt products.

She was also often experiencing diarrhoea after eating fatty foods- a clear sign of a liver that is not functioning at its optimal best.

We modified Alex’s diet to reduce the amount of coconut foods intake as this is not ancestral to her Anglo-saxon genetic heritage and was slowing down her metabolism and impacting gut health. We also discussed cutting out the caffeine and alcohol gradually as she began feeling better on the nutritional program.

Eliminating caffeine and eating regular meals with a good amount of protein is very important for blood glucose related conditions such as PCOS in order to minimise blood sugar fluctuations and cortisol (stress hormone) surges.

One of the investigations to determine the best diet for Alex was Carbchoice carbohydrate genetic test (which is covered in functional medicine testing) which came back unsurprisingly showing that Alex’s genetic ability to digest high amounts of starches and carbs was very low. This is something she will keep in mind on an on-going basis in order to manage her weight effectively.

We conducted a gut microbiome test that showed significant imbalances in Alex’s bacterial populations that had to be gradually re-adjusted with dietary means as well as pro and pre-biotics.

In addition to testing positive for Pyrroles, Alex’s hair mineral analysis showed a very slow metabolism, with elevated adrenal (stress) and thyroid (metabolism) activity. This type of profile comes up when we experience acute stress in our lives- whether physical or emotional, or both.

Also, a simple basal body temperature measuring test was showing us that Alex’s thyroid was clearly under-functioning -despite being hot all the time, her metabolic rate was actually very low. This was later confirmed by comprehensive thyroid blood tests.

This sort of metabolic picture means that the person is in a fight/flight state and requires a lot of nutritional and lifestyle balancing to bring the system back into balance.

We discussed introducing mindfulness and relaxation techniques into Alex’s routine and using calming exercise such as yoga instead of weight loss targeted, more draining exercises.

We also added magnesium supplementation as well as several hormonal supplements to begin regulating Alex’s period in order to get her fertility on track.

We undertook genetic testing for Alex, which I often do in clinic for those with long term chronic health conditions in order to understand the root causes of illness.

We implemented several nutrition and supplement strategies to address Alex’s unique and challenging genetics to optimise her B vitamin metabolism (so important for fertility amongst other areas), hormonal balance and mental health balance.

What underlied Alex’s insomnia, anxiety and skin itchiness is what I am increasingly seeing in clinic- histamine overload/intolerance.

Genetic variations relating to clearing histamine out of the body combined with poor liver function due to stress and toxicity as well as gut issues created a perfect storm for Alex in which she experienced a collection of symptoms: heat, anxiety, insomnia, itchiness and poor tolerance of high histamine foods such as long cooked bone broths, fermented foods and animal meat- all foods that were present in abundance in Alex’s diet.

SIBO is a gut conditions that underlies a lot of histamine issues- this is an important area to address when reducing histamine overload. More on SIBO here.

For a period of time, we restricted Alex’s intake of these foods by following a lower histamine diet while working on her methylation function, liver and gut issues and taking appropriate supplementation.

Whilst the above factors were being addressed, we were also working on Alex’s hormones (reducing testosterone that was driving many of the PCOS symptoms) and supporting her adrenal function (working on the HPA -the hypothalamic pituitary axis) to reduce her brain’s state of fight/flight as well as improving her progesterone levels.

A lot of work to reduce Alex’s levels of inflammation was also undertaken with dietary measures (for example, increasing anti-inflammatory herbs/spices) and supplements.

Alex was also regularly undertaking detoxification treatments using an infra red sauna in order to reduce her toxicity levels ahead of pregnancy.

After just a few months on a nutritional balancing program, Alex has reported feeling much more stable emotionally, reacting better to stressful situations, her sleep improved, her bowel movements became more regular. Very importantly, she was now having a very short but regular period and was ovulating. She said ‘I’m feeling the best I’ve ever felt in my life’.

In just over 12 months, Alex fell pregnant naturally, without the use of IVF which she had been told for years she would need.

In January 2017, she had a robust, healthy, gorgeous baby boy who is thriving today on a wholefoods diet, which his mum has now become an expert in.

Here are some comments from Alex about her nutritional and functional medicine work with me:

“Maria changed my life. I had suffered for years, and had seen specialist after specialist who only offered drugs to suppress symptoms. A few blood tests and some supplements later, I was a new person. Maria is thorough in her investigations, testing before and after supplements to make sure she is on the right track. So happy I found her!!”

Alex’s case is definitely more on the complex side and I chose it to show you how many factors from genetic, metabolic, mental, hormonal and lifestyle factors can impact our health and how we can work to address these root causes in order to achieve positive health outcomes.

To find out how I can help you address YOUR health condition, click HERE to book your consultation.

*Not her real name. Case study used with permission of client. 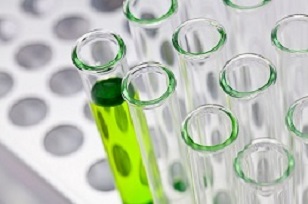 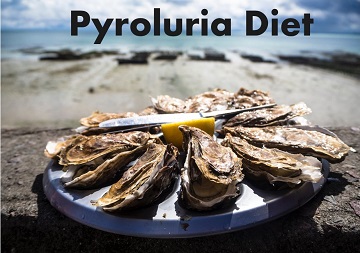 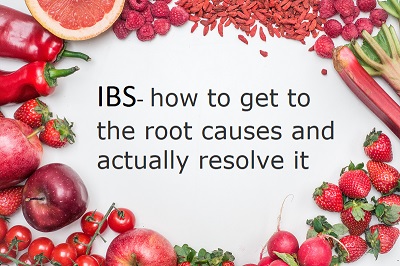 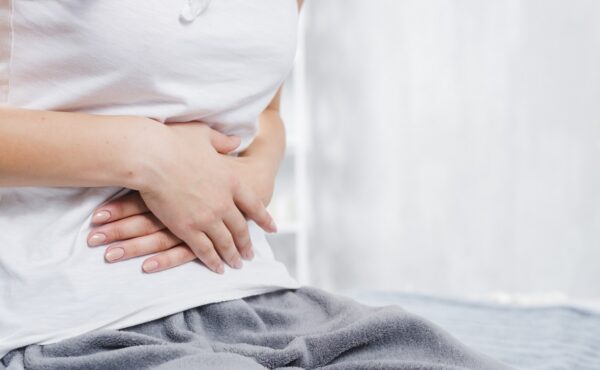 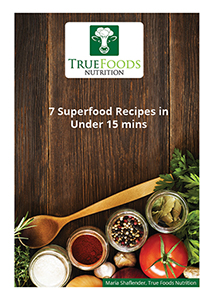